McLaren as one of the coolest automotive brands delivers another brand icon after the #McLarenSenna, the #McLaren600LT. 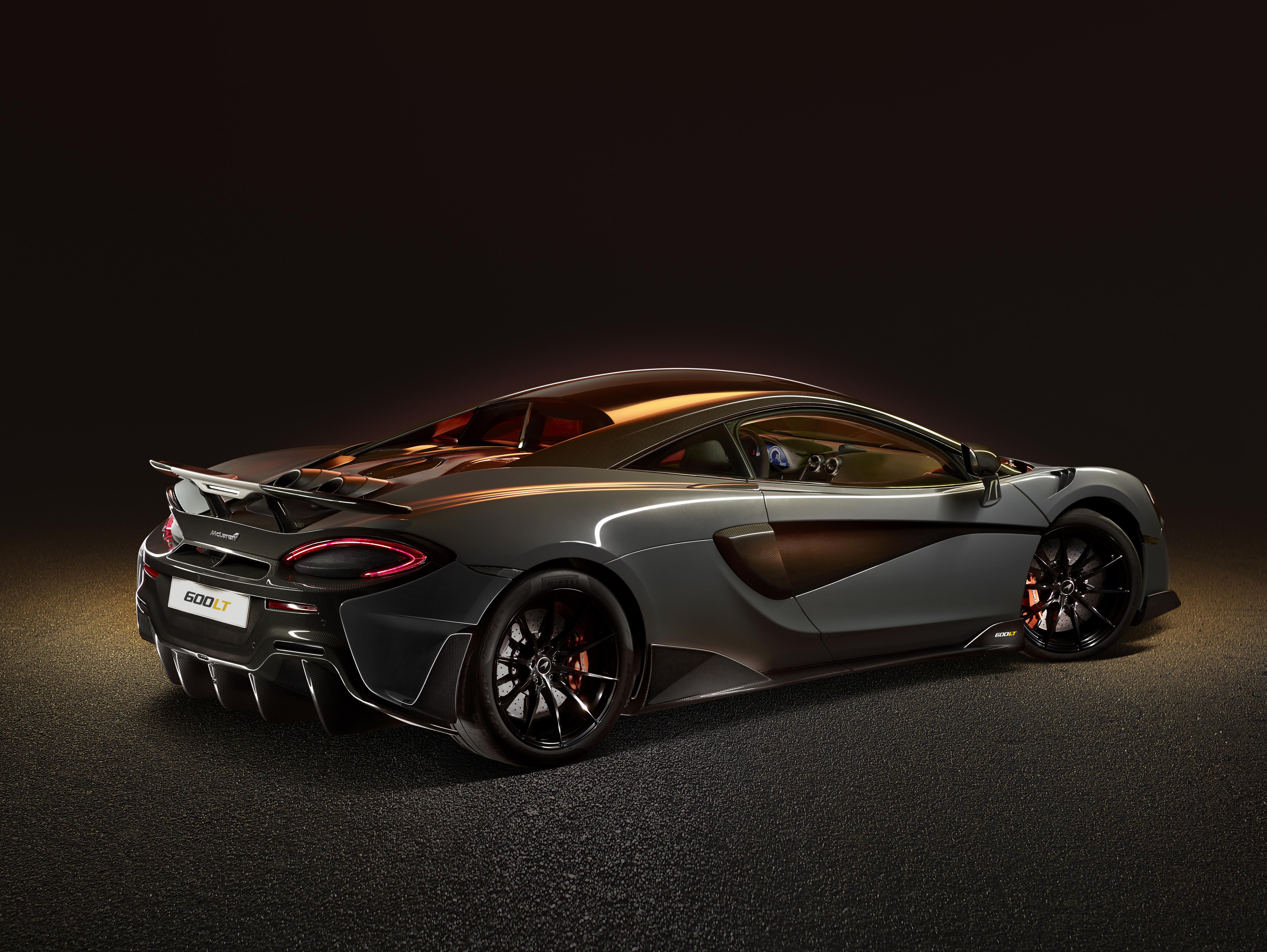 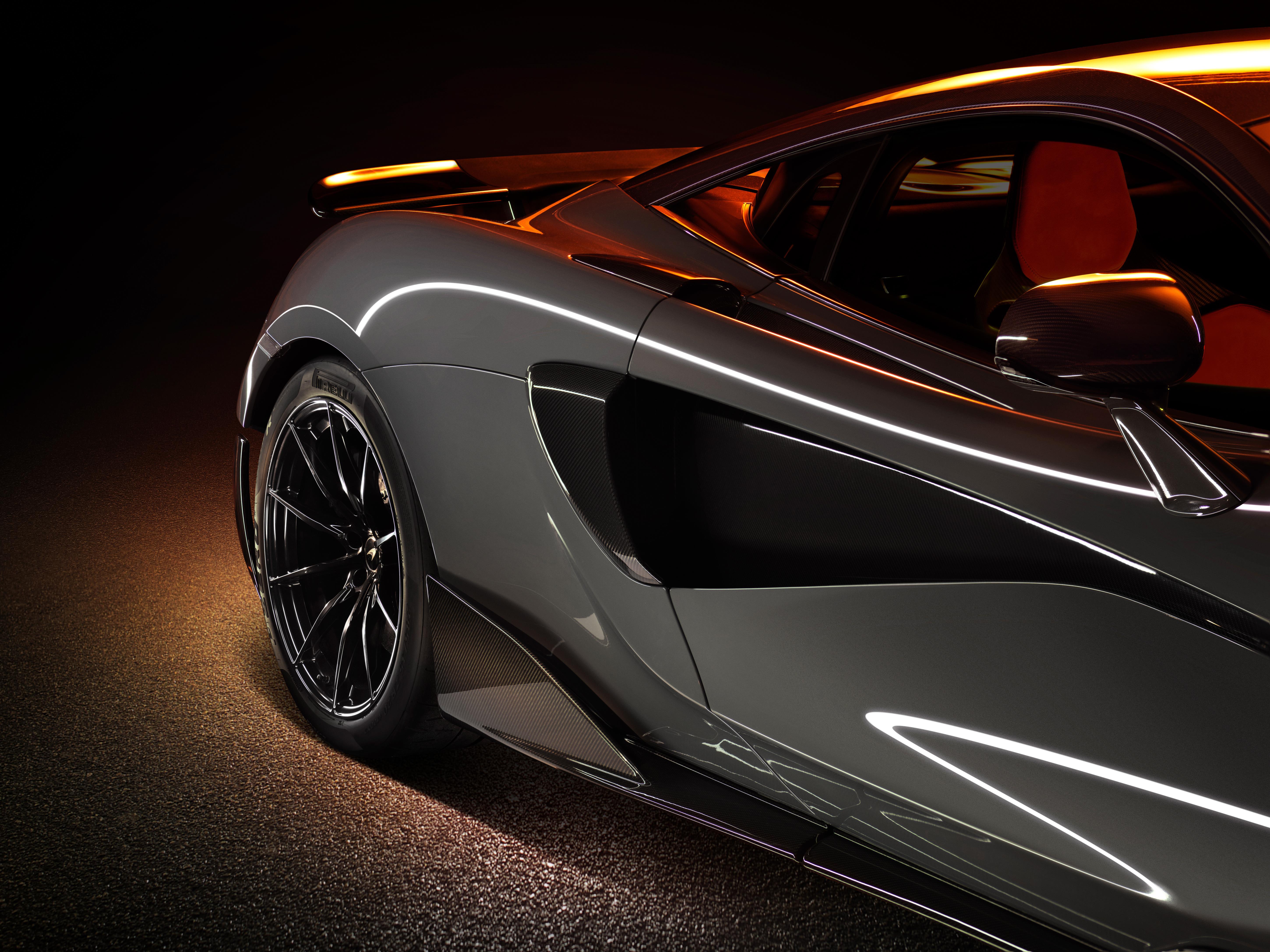 The McLaren 600LT marks the beginning of the next chapter in the McLaren ‘Longtail’ (LT) story and at the same time sets a new sportscar benchmark as the fastest, most powerful and most track-focused – yet road legal – Sports Series McLaren has created.

“The McLaren 600LT is only the fourth ‘Longtail’ McLaren in more than two decades. The McLaren F1 GTR ‘Longtail’ that began the lineage was one of the purest race cars in modern motorsport history. The 675LT resurrected the revered name, creating the purest distillation of the sheer driving pleasure embodied by all McLaren cars. Now we are further extending our very special LT family –albeit in limited numbers – and once again showcasing the ethos of optimised aerodynamics, increased power, reduced weight, track-focused dynamics and enhanced driver engagement that are the hallmarks of a McLaren ‘Longtail’.”
Mike Flewitt, Chief Executive Officer, McLaren Automotive 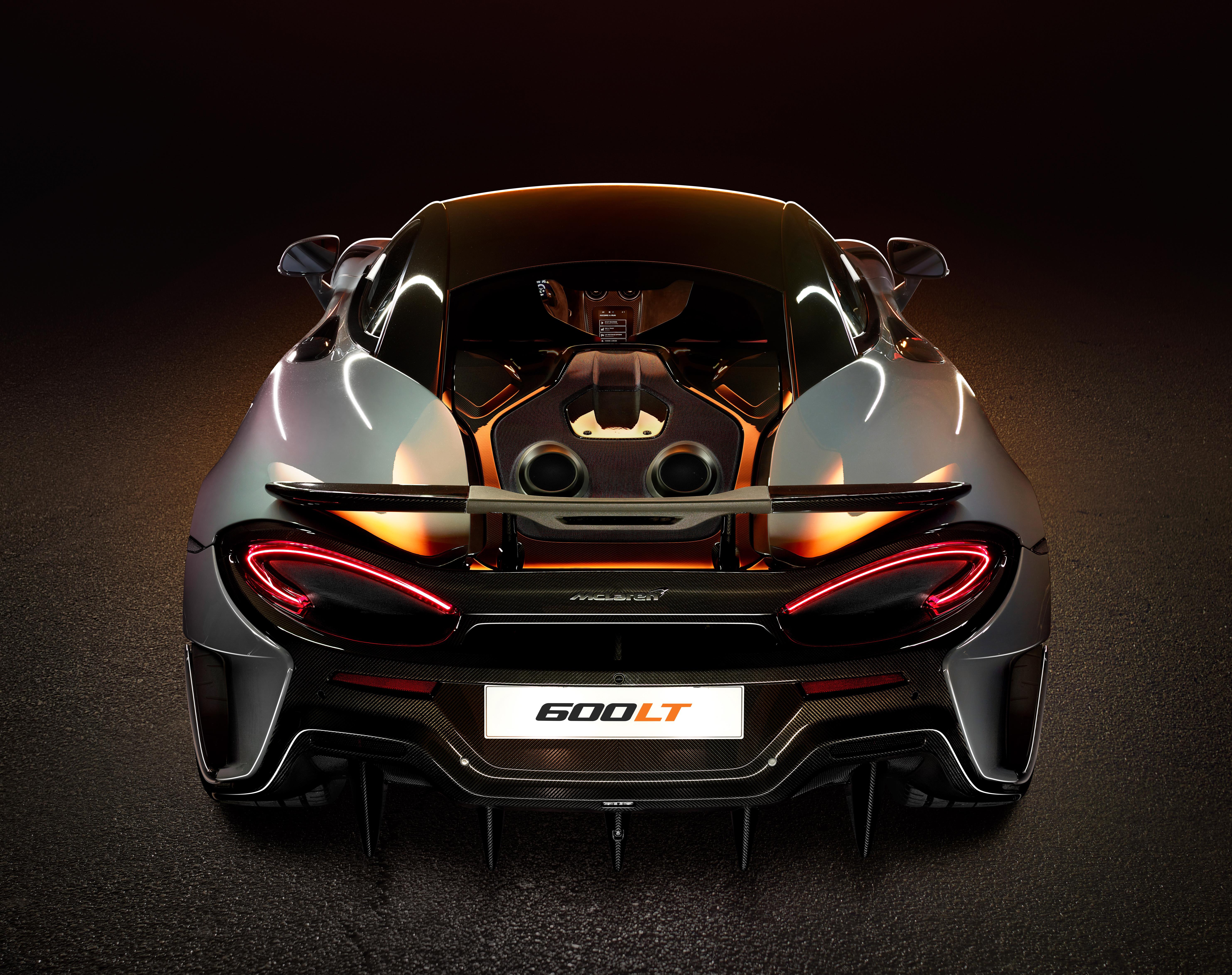 Inspired by the renowned McLaren 675LT and its iconic ‘Longtail’ racing predecessor, the McLaren 600LT is built to excel on roads and race circuits alike. The new addition to the LT family has all the physical hallmarks of a true McLaren ‘Longtail’, including a silhouette elongated by 74mm; it also has an extended front splitter, lengthened rear diffuser and fixed rear wing. In total, more than 23% of parts (by number) are different on a standard McLaren 600LT compared to a McLaren 570S Coupé.

Extreme weight-saving measures were at the heart of the McLaren 600LT programme from its outset, with a reduction of 96kg against the DIN weight of a 570S Coupé targeted and achieved. Built using the lightweight carbon fibre monocoque chassis for which McLaren is renowned, the 600LT further benefits from new carbon fibre bodywork that lowers vehicle weight as well as optimising aerodynamic performance. Unique top-exit exhausts ensure that the new LT model has a distinct aesthetic appearance that identifies it as something particularly special, as well as delivering a substantial weight saving and an incredible aural experience. 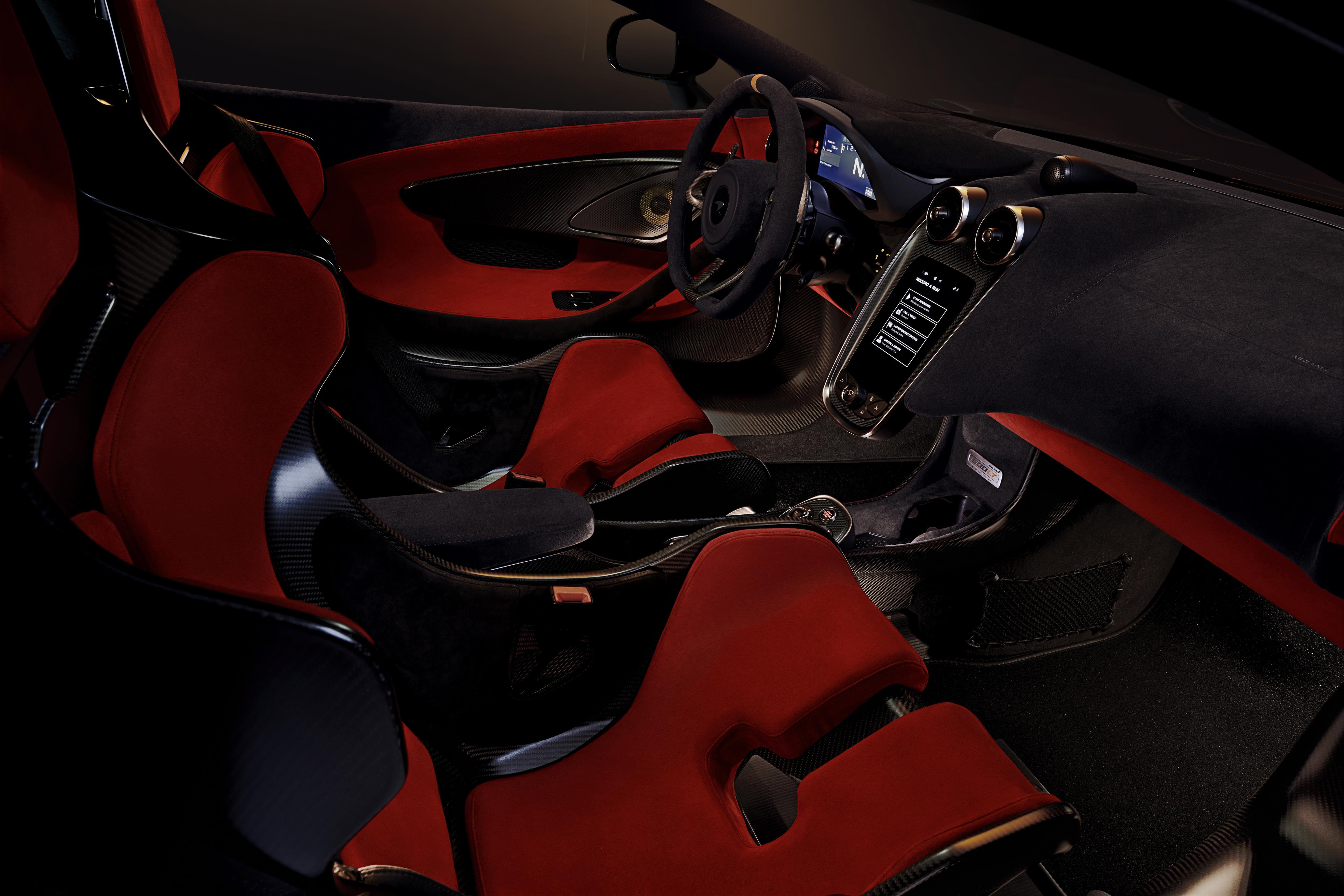 The minimalist, track-focused interior has Carbon Fibre Racing Seats first seen on the McLaren P1™, and lightweight Alcantara® trim material features extensively. Super-Lightweight carbon fibre seats developed for the McLaren Senna are available in lieu of the standard seats if customers are looking for further weight savings, McLaren Special Operations (MSO) offers a range of features that includes a carbon fibre roof and cantrails and vented carbon fibre front fenders. With every lightweight option fitted, the lightest dry weight of the new McLaren 600LT is as low as 1,247kg.

To deliver the extreme performance appropriate for an LT, the McLaren 600LT is powered by a twin-turbocharged, 3.8-litre V8 engine that benefits from an uprated cooling system and reduced back pressure in an exhaust system that is even shorter and more extreme than that of the McLaren Senna. Peak power is 600PS (592bhp), with maximum torque of 620Nm (457lb ft) and the power-to-weight ratio of the McLaren 600LT at lightest dry weight is an astonishing 481PS/tonne.

The essence of a McLaren ‘Longtail’ is more though than its physical silhouette and more even than reduced weight and increased power; the absolute remit of the McLaren 600LT is to engage and excite drivers to the highest levels imaginable. To this end, the new model features the forged aluminium double-wishbone suspension and lightweight braking system from the second-generation McLaren Super Series; bespoke, track-focused Pirelli P Zero™ Trofeo R tyres; quicker steering; sharpened responses from the throttle and brake pedals; significantly firmer engine mounts and exhausts that are mounted virtually behind the driver’s shoulder to bring the incredible sound of the powertrain into the cabin.

The new carbon-fibre bodywork and large rear diffuser deliver substantially increased downforce to further enhance the 600LT dynamic experience, especially on a track. The driver is encouraged by the deep-rooted and incredibly pure connection with the car to fully exploit the optimised aerodynamics, reduced weight, increased power and track-focused dynamics. This higher level of excellence and engagement is the ethos at the heart of the McLaren 600LT, just as it was with the McLaren 675LT models and the McLaren F1 GTR ‘Longtail’ before them. 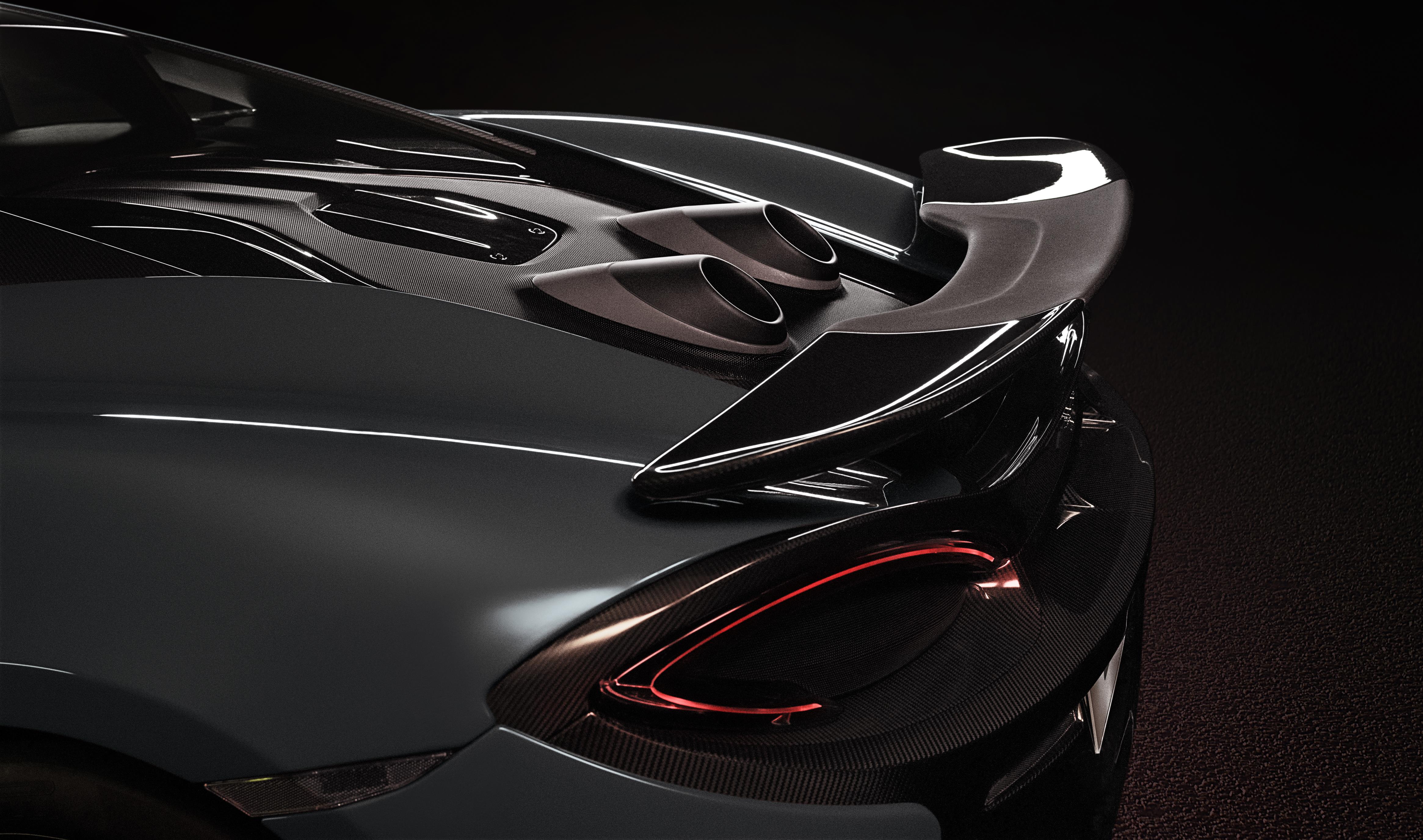 The dramatic ‘Longtail’ iteration of the McLaren F1 GTR made its debut during the 1997 season, the distinctive stretched silhouette earning it the now-iconic name. Only nine examples and the development prototype were built. In addition to the elongated bodywork that reduced drag and increased downforce, there were further developments beneath the stretched skin, including fully adjustable suspension and a sequential transmission.

McLaren Automotive revived the legendary ‘Longtail’ name at the 2015 Geneva International Motor Show, with the launch of the 675LT Coupé. Weight was minimised and aerodynamics were optimised, in parallel with power and driver engagement increasing. The track-focused dynamics were proudly obvious and only a limited number were available. True to the spirit of its ‘Longtail’ predecessor and the traits inherent to a car wearing the LT badge, the 675LT Coupé was at the time of launch acknowledged as the purest, most involving series-production McLaren supercar to date. 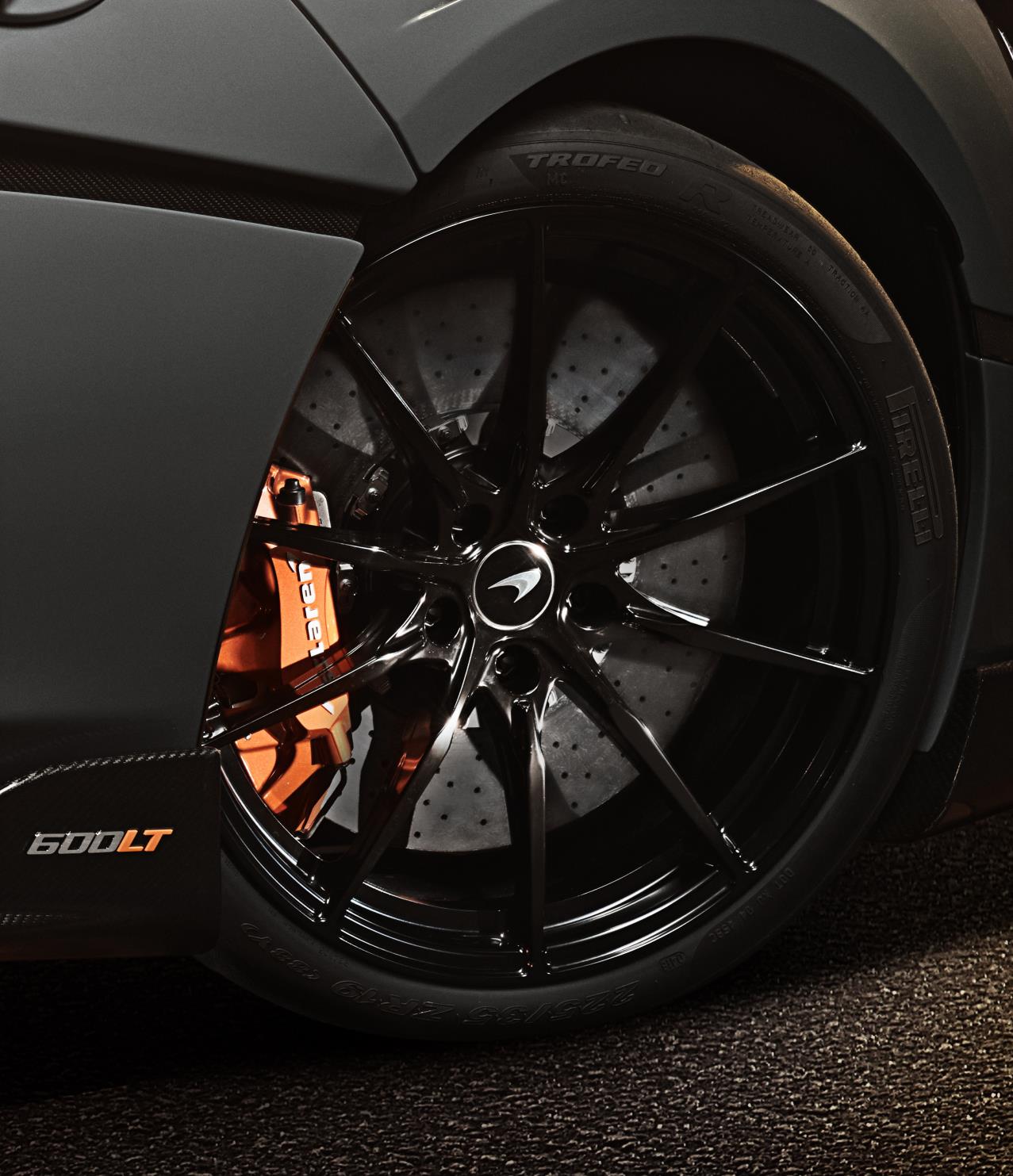 Responding to customer demand after the production run of Coupés rapidly sold out, McLaren created the McLaren 675LT Spider. The most focused, fastest and exhilarating open-top model to ever wear a McLaren badge, all 500 examples were sold within two weeks.

Volume of the new McLaren LT will also be strictly limited. Production of the 600LT Coupé will begin in October 2018 and last for around 12 months, with build slots scheduled around existing Sports and Super Series models, as well as the sell-out Senna, Senna GTR and BP23. The specialist carbon fibre body panels of the 600LT will also ensure that it is significantly rarer than its Sports Series brethren.

Like its 675LT predecessors, each 600LT will be hand-assembled at the McLaren Production Centre in Woking, Surrey. Available to order now from McLaren retailers – subject to availability – the McLaren 600LT Coupé is priced from £185,500 with taxes (UK), which includes* a Pure McLaren Road Owner Track Day at a race circuit, with expert driving tuition. 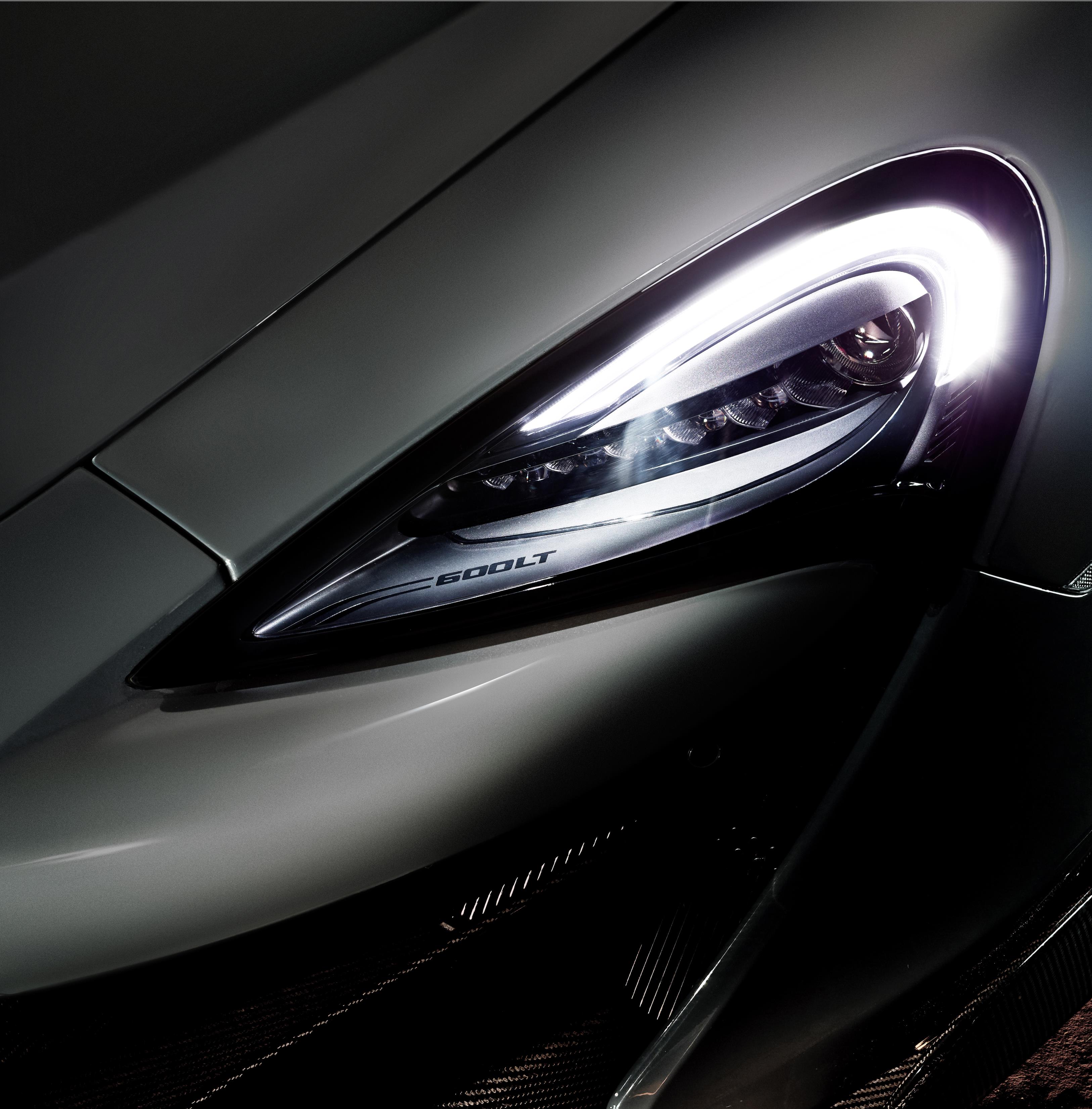 To discover more about the new McLaren 600LT, visit: http://cars.mclaren.com/sports-series/600lt. A film showing the car in action can be viewed here: https://youtu.be/KCzFQy0px7M.