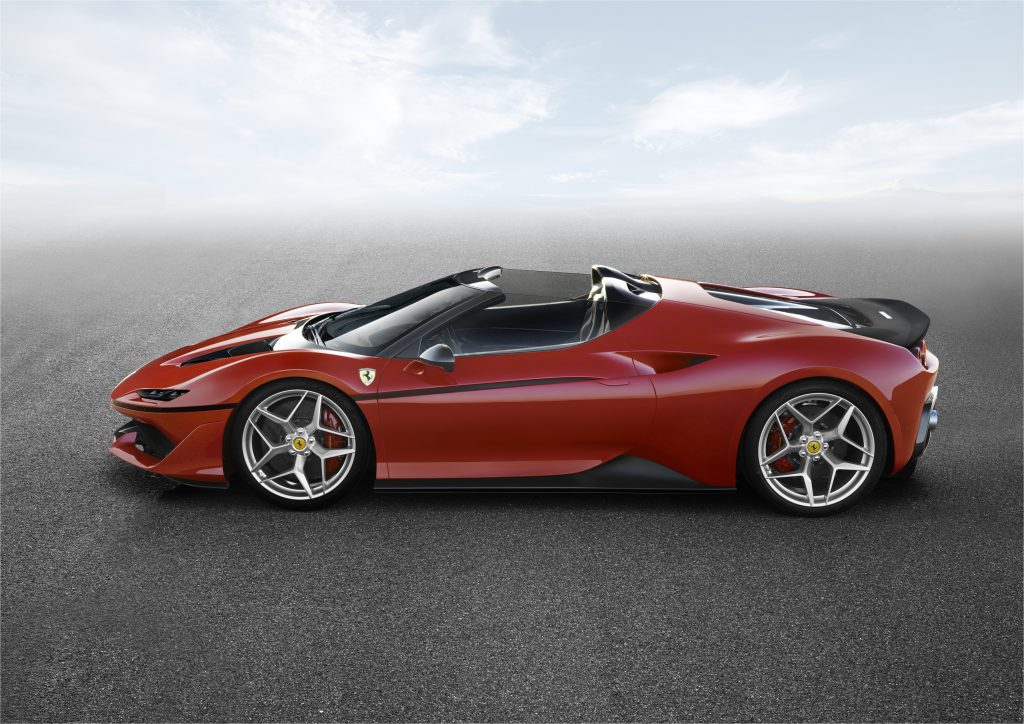 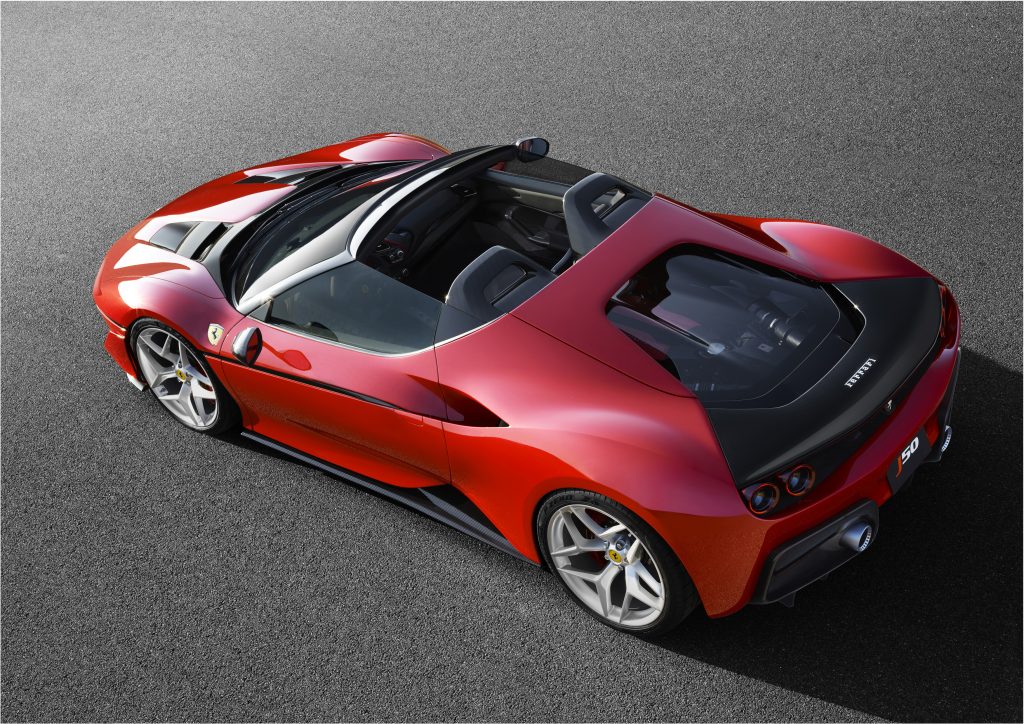 • detailed aerodynamic development with a number of significant
functional solutions

• each one will be tailored specifically to the
customer’s requirements, according to the
spirit of Ferrari’s fuori serie tradition.

During a special celebration held at the National Art Center in Tokyo to commemoratethe 50th anniversary of Ferrari in Japan, Ferrari revealed a new strictly limited series of bespoke cars, the J50.
The Ferrari J50 is a two-seater, mid-rear-engined roadster that marks a return to the
targa body style evocative of several well-loved Ferrari road cars of the 1970s and
1980s. Created by Ferrari’s Special Projects department and designed by the Ferrari
Styling Centre team in Maranello, just 10 examples of the J50 will be built and, in the
spirit of Ferrari’s fuori serie tradition, each one will be tailored specifically to the
customer’s requirements.
Based on the 488 Spider, the J50 is powered by a specific 690 cv version of the 3.9-litre
V8 that won the overall International Engine of the Year Award this year.
The bodywork is all new and heralds a radically futuristic design language, with a highly
distinctive personality that suits the tastes of a clientele that seeks the utmost in
innovative styling. The design approach was led by the desire to create a very low-slung
roadster, encapsulating intrinsic Ferrari values of nimbleness and agility. To achieve
this, a strong dynamic was imprinted on the flank of the car by the converging interplay
between two main guiding lines: the slanted top edge of the side window, continuous
with the windscreen, and the raked black swage line which dramatically rises from the
low-set nose until it vanishes in the air intake aft of the doors.
While the “helmet visor” effect, which spawns from the window graphic, is reminiscent
of Ferrari’s open competition barchettas going as far back as the 1950s, the black
dividing line is a novel interpretation of a recurring Ferrari styling cue seen on iconic
models such as the GTO, F40 and F50. Circling around the front of the car below knee
height, it is a key element which alters the perception of the beltline, setting it at a
much lower height than usual, transforming the J50 into a barchetta. 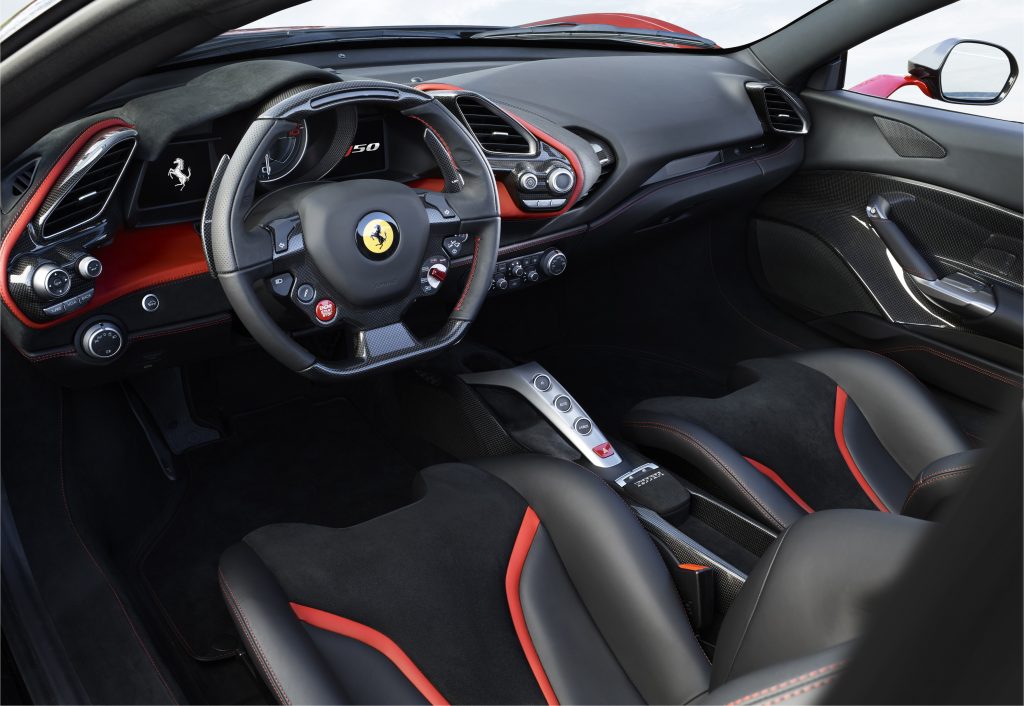 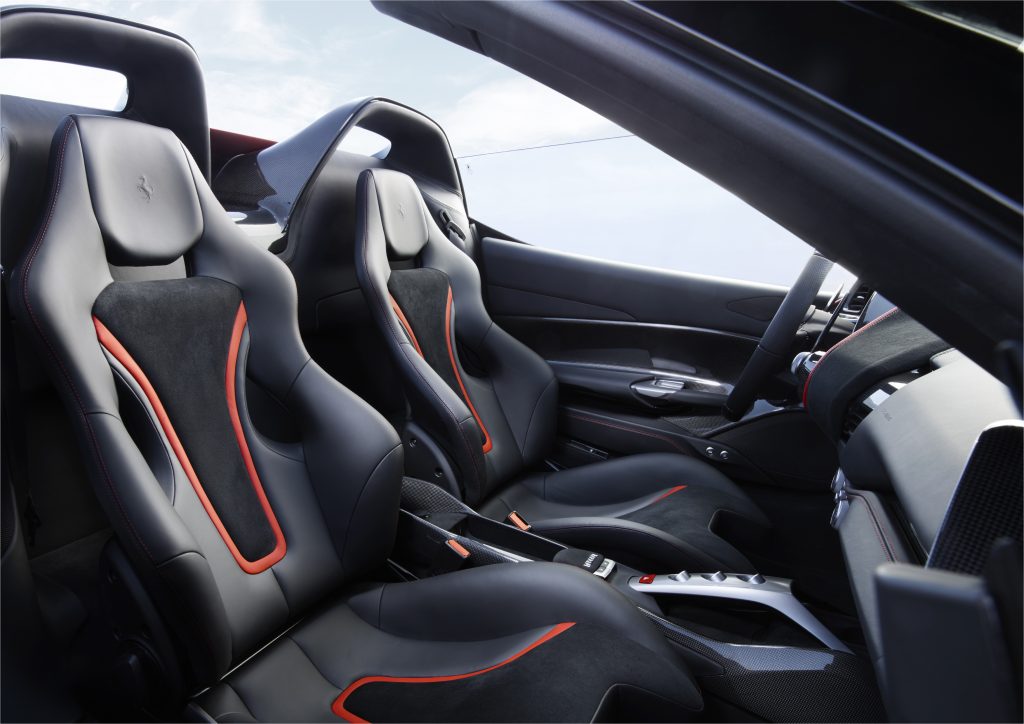 The bonnet section is lower at the centre with raised wheelarch crests giving the
emphasized muscularity typical of Ferrari mid-engined sports cars. Two carbon-fibre air
channels in the front bonnet create an even more diminutive and sharper looking front
mass underlined by the full LED headlights that feature a specific and very dynamic
profile.
The J50 benefits from detailed aerodynamic development with a number of significant
functional solutions. Firstly, the radiators have been positioned closer together, and
the front bumper has been completely redesigned. The windscreen header rail has been
lowered allowing more airflow over the aero foil and thus over the rear spoiler.
The sophisticated tail section is dominated by the artful interplay of graphic design
themes and three-dimensional elements. The engine is framed by a transparent
polycarbonate cover which is intricately shaped to provide a visual extension of the two
separate roll hoops protecting the heads of driver and passenger. A transverse aero foil
projects as a bridge between the hoops, effectively revisiting one of the most distinctive
features of Ferrari sports prototypes of the 1960s.
The rear is decidedly aggressive in nature, with the quad taillight design widening the
car visually under a high-downforce wing profile. The rear diffuser features an extractor
shape inspired by jet engine afterburners, giving the car a powerful stance. 20” forged
rims of unique design were crafted specifically for this limited-edition model.
Inside the cabin, specific trim adorns the sports seats, echoing the design of the rear
bonnet contour to provide a unmistakable signature feature. The carbon-fibre hard
targa top is divided into two pieces which stow conveniently behind the seats.
The J50 presented at the launch in Tokyo is finished in a special shade of three-layer red
with a red-over-black interior trimmed in fine leather and Alcantara.